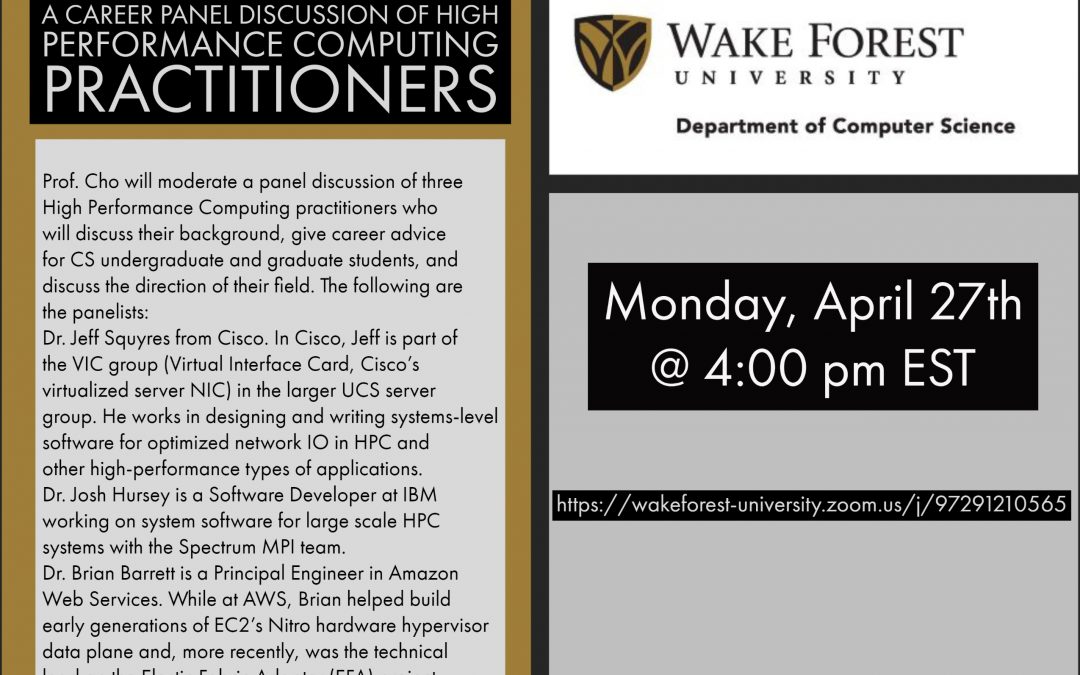 Prof. Cho will moderate a panel discussion of three High Performance Computing practitioners who will discuss their background, give career advice for CS undergraduate and graduate students, and discuss the direction of their field. The following are the panelists:

Dr. Jeff Squyres has worked in the High Performance Computing (HPC) field since his early graduate-student days in the mid-1990’s, and is a chapter author of the MPI-2 and MPI-3 standards.  Jeff received both a BS in Computer Engineering and a BA in English Literature from the University of Notre Dame in 1994; he received a MS in Computer Science and Engineering from Notre Dame two years later in 1996. After some active duty tours in the military, Jeff received his Ph.D. in Computer Science and Engineering from Notre Dame in 2004. Jeff then worked as a Post-Doctoral research associate at Indiana University, until he joined Cisco in 2006.  In Cisco, Jeff is part of the VIC group (Virtual Interface Card, Cisco’s virtualized server NIC) in the larger UCS server group.  He works in designing and writing systems-level software for optimized network IO in HPC and other high-performance types of applications.

Dr. Josh Hursey is a Software Developer at IBM working on system software for large scale HPC systems with the Spectrum MPI team. He received his B.A. degree in Computer Science from Earlham College, and M.S. and Ph.D. in Computer Science from Indiana University. Josh has held internships at multiple national laboratories (LANL, LBNL, ORNL) during graduate school, spent two years as a post-doctoral researcher at ORNL, and four years as an Assistant Professor at the University of Wisconsin-La Crosse before joining IBM to work on the CORAL supercomputers currently running at ORNL and LLNL. Those CORAL systems support a broad portfolio of scientific endeavors including, most recently, the fight against COVID-19.

Dr. Brian Barrett is a Principal Engineer in Amazon Web Services.  While at AWS, Brian helped build early generations of EC2’s Nitro hardware hypervisor data plane and, more recently, was the technical lead on the Elastic Fabric Adapter (EFA) project.  EFA brings the main performance advantages of HPC networks to EC2’s cloud environment.  Prior to joining AWS in 2014, Brian was a Principal Member of Technical Staff in the system software research group at Sandia National Laboratories and has worked at Los Alamos National Laboratory.  Brian received his M.S. and Ph.D. in Computer Science from Indiana University, Bloomington and his B.S from the University of Notre Dame.